If you train in muay thai, there’s a chance you’ve seen fighters pouring oil from a yellow-labeled glass bottle and rubbing it on themselves. If not, you’ve probably smelled the strong scent. It’s called Namman Muay.

Why do Fighters Use Namman Muay? What is it?

Namman Muay is an oil-based liniment that is a topical analgesic pain reliever. It’s similar to IcyHot and is made of wintergreen.

The main use of Thai liniment oil is for pain relief.

Fighters use the oil as part of their pre-fight massage. Their cornermen rub them with the liniment vigorously. It helps reduce pain felt during the fight, and it also helps reduce bruising.

An added benefit is the phycological effect it has on the fighter. Whether it’s the smell or the warming effect it has on the muscles, the liniment massage helps fighters get in the right mindset. It could be a placebo effect, but if a fighter believes it helps with performance then it does.

While rare, it is possible to overdose from the methyl salicylates in Namman Muay.

In 2007, a teenage track star passed away when her body absorbed too much Bengay.

Namman Muay should not be applied to over 40% of the body, or if you have a skin condition or are on other medications. It’s also toxic if ingested. 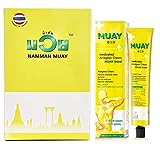 The cream is an alternative to the oil. It has the same effect and smell, but a lot less mess.

It’s not the same as the traditional oil, but it does the trick. Some say it’s easier to rub into muscles too.

Tiger balm has menthol, but it does not have methyl salicylates that are in Thai liniment. Unlike liniment, it contains camphor to relieve pain.

It’s not really used for muay thai warmups, but more so for pain relief at home.